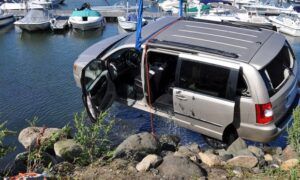 New Jersey resident Patrick Conroy drowned in this van after his vehicle left the travel portion of the parking lot of the Cos Cob Town Marina and entered the water. The town of Greenwich owns the marina and recently agreed to settle the case for $600,000. Courtesy photo.

A Cheshire attorney has secured a $600,000 settlement for the estate of an 80-year-old New Jersey resident who drowned after accidentally driving his van off a parking lot and boat ramp known as the Cos Cob Town Marina.
The town of Greenwich owned and controlled the parking lot and boat ramp, so the case hinged on municipal liability, said plaintiff attorney Frank Bartlett Jr., founder of Bartlett Legal Group.
The town argued the only remedy was for the plaintiff to sue under the state’s highway defects statute, under Section 13a-149, which governs damages for injuries from defective roads and bridges.
Bartlett said his team investigated the history of the marina and learned that in the 1960s and 1970s, the marina had barriers that would have prevented the plaintiff decedent Patrick Conroy from going into the water. An amended lawsuit was filed Aug. 6. The incident at the boat ramp occurred in September 2015.
“We had to be creative because of municipal liability,” Bartlett said. “Because this marina was adjacent to the roadway, the town argued the sole remedy available for us was the highway defects statute. But it’s difficult to win under that statute because you have to show the dangerous condition was the sole proximate cause of the injury sustained. If the plaintiff is even 1% negligent, then the claim fails.” It’s not clear why Conroy, who was attempting to negotiate a turn, drove into the water.
Bartlett said he rejected using the statute as a defense and instead learned, through his investigation, of the barriers that were in place at the marina in the 1960s and 1970s. Bartlett said he would have argued to a jury that Greenwich was negligent in removing those barriers decades ago.
“The sole issue for us was going to be whether or not the marina constituted a nuisance, and whether the town’s act in removing the barriers contributed to this accident,” Bartlett said Monday.
The case settled Dec. 5. Jury selection was slated for Dec. 18.
Greenwich Assistant Town Attorney Aamina Ahmad told the Connecticut Law Tribune Monday that the town is considering placing barriers at the site. She also said that “over the course of the litigation, both sides spent a lot of money defending the case.”
Noting that Bartlett originally filed a $6.5 million offer of compromise, Ahmad said, “There was a significant reduction from what they first asked for to where we ended up. I think the plaintiff had started out with a much higher expectation. The town takes these cases very seriously and fully vets them.”
The $600,000 settlement, Bartlett said, will be divided. He said $180,000 will go to the estate, while $420,000 will go to the plaintiff’s family members who were at the marina and witnessed the drowning. These witnesses included Conroy’s son, John, John Conroy’s wife and four of Patrick Conroy’s grandchildren.
The family, Bartlett said, had just dropped their boat off at the marina and Patrick Conroy was attempting to bring the family vehicle to the parking area. Patrick Conroy was trapped in his vehicle and drowned, Bartlett said.
In court papers, the town argued that Conroy was partly responsible for his own death in that he “failed to be watchful of his surroundings, failed to exercise reasonable care for his safety in the manner in which he was operating his vehicle.”

Family of Boy Abused by Branford Businessman Settles for $1,500,000

“BRANFORD — The family of a young boy sexually assaulted by the former owner of a Branford graphics company over a two-year period has reached a $1.5 million settlement with the perpetrator, according to the Connecticut Law Tribune.” “The family’s attorney, Frank Bartlett of Cheshire-based Bartlett Legal Group, told the Law Tribune that the boy’s father worked for Guay at K&G Graphics and the boy, who was 8 years old when the abuse began in 2014, often would accompany his father to work.”

The entire article can be found here

Frank Bartlett of Bartlett Legal Group in Cheshire, who was not involved in this case but has handled many other personal injury cases, called Kamp’s ruling a “significant and well-reasoned” decision that allows a plaintiff to move forward in a case in which a child was born and later died. He said the law in this area is likely to change. “While in this case viability was not the determining factor because the child was born as opposed to dying in utero, medical advances are changing the line of viability,” Bartlett said, noting there have been rare cases in which children born before 22 weeks have survived.

9/20/2013 Below is TV coverage of Attorney Frank Bartlett before the CT Supreme Court in Wood v. Club LLC.\

His arguments start 30 minutes 20 seconds into the video. Click on the photo below to view the video. After watching the video click here for the Supreme Court’s Ruling.

02/21/2012 News conference at the Omni Hotel in New Haven.  Covered by local TV stations, Attorney Frank Bartlett of Cheshire and Kelly Clark of Portland, Oregon announced a lawsuit against the Boy Scouts of America and the Connecticut Yankee Council of the Boy Scouts saying they knew or should have known that convicted abuser David “Dirk” Davenport had molested boys in Montana and Nebraska prior to his activities in Connecticut.

Appellate Court case held at Westhill High School Stamford. Attorney Bartlett argues case and then answers students questions about this case which they have been studying.

Case NNH-CV17-5039765-S John Doe PPA v. Guay Roger 02/11/2019 Judgement for the Plaintiff The abuse started in 2014 when the child would accompany his father to work and continued for over two years at various locations before others became aware. The abuser is currently in prison and, to date, over $1,000,000 of his assets have been secured for the boy's benefit.

John Roe #1 v. Boy Scouts of America, et al. – $1,000,000 judgment obtained against a Boy Scout scoutmaster on behalf of a young boy who suffered sexual abuse at scouting events and at a local Boy Scout camp.

Colleen B. v. 1-3 Long Wharf Drive Personal Injury – slip wins $520,000 verdict for woman who suffered an ankle sprain and injuries to her lower back which required surgery after stepping in a depression in a parking lot.

For additional cases and details please go to RESULTS on the main menu.

Dear Attorney Bartlett, All 6 of us on that jury thought you were a great lawyer.  We said that a multitude of times.  We think you are a very good, organized, ‘with it’, lawyer, and all 6 of us said we’d be completely comfortable hiring you if we ever needed a lawyer. Lisa S.  Juror